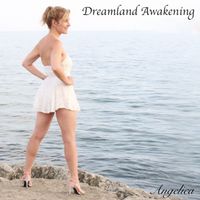 From the recording Dreamland Awakening (mp3)

"World Of Dreams", is a collection of CD's, Dreamland Awakening, Magic's Mystery, Trilogy & World Of Dreams Thirty Piano Pieces. The music is centered around Angelica's story about a journey through destiny in The Dream Machine. Adults become like children again, when they are pulled from their bodies in their sleep, hypnotized like a Ballerina In The Miracle Mind, by a Spider, who is disguised as a Gatekeeper, the Sandman in your sleep. He crawls through their minds, hypnotizing them, playing games, erasing their memories, programming thoughts, stealing their dreams, in exchange for his nightmares. He plays a Melody Of Hearts in his Soul Catcher, tricking them into a higher state of consciousness. Spider, is a thief of thoughts.

"The Dream Believes" by Angela Johnson

This is so good, I turn and see your eyes
I've got something here that I must say to you
And here we are, we are all alone
We are closer and we have come oh so far

You wanted me and I wanted you
Sharing secrets, the meaning's revealing
And here we are, we are all alone
We are closer and we have come oh so far (Chorus)